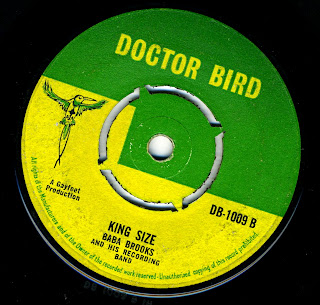 Another ska single on the Doctor Bird label from the late 60's. No idea who the Saints were on the A side they do a ballad called Brown Eyes but the B side instrumental by Baba Brooks is a top tune- a version of Making Whoopee called King Size.

"Oswald Baba Brooks started his musical career as a trumpet player with the Eric Dean Orchestra in Jamaica in the 1950's. The Jamaican bands played mostly Folk, Afro, Jazz, they played at clubs, big hotels and sometimes on local radio. This was an exciting scene at the time but began to die out towards the end of the fifties. Band members began to move into the recording studios in Kingston that were emerging at the time with the advent of the Sound System. The records that were produced kept the musicians well employed. Most big bands began to die out and only a few managed to survive into the sixties and beyond. One such band was Byron Lee, they became the Islands premire band and established many talented musicians including Baba Brooks. He soon became a popular session man working for many of the top record producers and featured on many of the great Ska tracks during the golden period from 1963 - 1967. He was riding high in 63' with three hits in the Jamaican charts, Musical Communion, Bank To Bank and his version of Watermelon Man. This was a year before the Skatalies had been formed as a band, with whom he was to play on many occasions."

Baba Brooks - King Size
Posted by Wastedpapiers at 5:03 AM