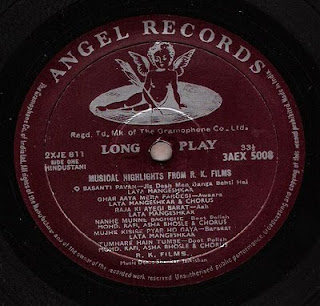 A Hindi film from the late 50's I would guess. I used to find these quite regularly in Cheshire Street market in East London when I lived in Stepney in the 80's. This one is pretty typical with some wonderful singing by Asha Bhosle, Mukesh and Lata Mankeshkar the supreme bollywood voice over artists of the day.
I have just realised this LP is in the wrong sleeve which complicates things a little. The record label says this is "Musical Highlights From R.K. Films" on the Angel Label. I will have to try and track down the cover art elsewhere.

"Mukesh was born in Punjab, in a small middle class family. His father Lala Zorawar Chand Mathur was an engineer. His mother was Chand Rani. He was the sixth in a family of ten children. The music teacher who came home to teach Mukesh's sister Sundar Pyari, found a pupil in Mukesh who would listen from the adjoining room. He had a younger brother Parmeshwari Das. Mukesh left school after the 10th standard and worked briefly for the Delhi Department of Public Works. Mukesh experimented with voice recordings during his employment in Delhi and gradually developed his singing abilities.

Mukesh got married in 1946 to Saral Trivedi Raichand alise Bachhiben in a temple in Kandiwali, at the residence of R. D. Mathur. Sarla was the daughter of a Gujarati Brahmin millionaire. With him having no proper house, an erratic income and a supposedly "immoral" profession, Mukesh and Sarla had to elope. Everyone made dire predictions of unhappy days and divorce; but both weathered the lean days and celebrated their thirtieth wedding anniversary on 22 July 1976, five days before his departure for the U.S.A. on 27 July 1976. The couple had five children as Rita, Nitin, Nalini(d. 1978), Mohnish (Taboo - nick name) and Namrata (Amrita). He is the grandfather of actor, Neil Nitin Mukesh.
"

Sadly I missed to download the Cranes Skiffle Group`s post. Maybe you can repost it ?
I wouldn`t have asked if I hadn`t read a recent comment where someone described you as gentleman - but don`t feel forced to do so...:-)

Btw, it`s NOT envy, he lied, but please stop telling us things like you`ve found a Lonnie Donegan- EP for 25p, as long as these things are impossible to find at all over here in Germany ! I`d rather you lied something about 25 quid or so; or do you want millions of german skiffle fans to come over to England and buy and carry off those treasures ??

Thanks for dropping by Joey. Sorry if I give the impression that these rarities are easy to find for pennies. If only it were so! Skiffle especially is as rare as hen's teeth! I shall try and re-up the one you want but it maye take me a while to find.