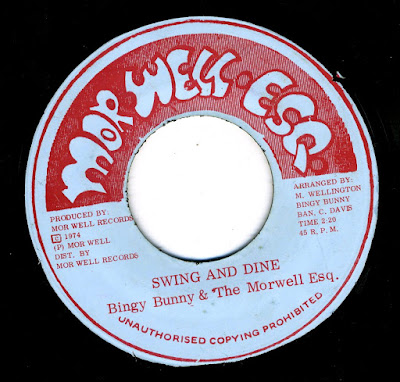 A 45 from the ska box which also contains some later reggae including this one probably bought because I liked the sound of the name.

"The Morwells were originally formed by Maurice 'Blacka' Wellington and Eric 'Bingy Bunny' Lamont in 1973. Later friend Errol "Flabba" Holt was brought in. During the mid to late 1970's the Morwells released a string of singles on their own "Mor-Well-Esq" label with Bingy Bunny usually singing lead vocals. Their first album "Presenting the Morwells" is a cult classic and its companion dub album "Dub Me" has been reissued by Blood and Fire. The Morwells released a total of four vocal albums: "Presenting the Morwells", "Crab Race", "Cool Runnings", and "Kingston 12 Toughie". During this period Bingy and Flabba were also working in the Kingston studios as session musicians. Bingy on Guitar and Flabba on Bass. The Jamaican studios of the late 1970's were a bee hive of musical creativity. Bingy and Flabba joined forces with Dwight Pickney on guitar, Style Scott on drums and Gladstone Anderson on piano and began laying down tracks for some of the great Jamaican artist of the day; Gregory Isaacs, The Wailing Souls, Isreal Vibration, Bunny Wailer, Prince Far I... Prince Far I called them the "The Arabs" but it was Bunny Wailer who gave them the name that the world would come to know them by: "The Roots Radics." The rest, as they say, is history. Sadly, the world lost Bingy Bunny in 1993."