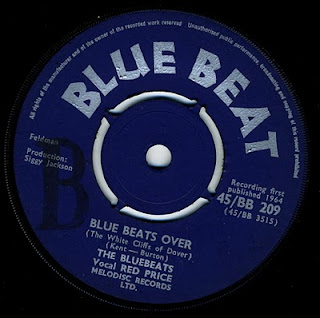 Another old Blue Beat single from the dusty box from 1964. No info. on Red Price who takes lead vocal on this. Sounds strangley MOR and not what you would expect from the label at the time. Covers of show tunes? An old Vera Lynne song? Very odd.

"The Melodisc label was originally dedicated to releasing Jazz and Blues imported from the US featuring artists such as Charlie Parker and Woody Guthrie, as well as UK recorded Jazz from early Jamaican artists such as Joe Harriotts 1953 e.p: Cool Jazz With Joe. Shallit also released African Highlife records from acts like Ambrose Campbell & His West African Rhythm Brothers, Rans Boi Ghana Highlife Band, Ayinda Bakare & His Meranda Band, and The Nigerian Union Rhythm Group. Trinidadian Calypso was also a big mainstay of the 1950s Melodisc catalogue and many sides were issued from artists such as Lord Kitchener, Lord Beginner, Trinidad All Star Steel band, and The Sparrow.

Revolutionised by jazz arrangements inspired by US big bands from multi-instrumentalist Rupert Nurse, and featuring noted Caribbean musicians like saxophonist Al King Timothy, and trumpeter Rannie Hart, the Calypso sound took on new dimensions on Melodisc, and gained much popular acclaim. A big seller of the time was Marie Bryants amusingly titled Dont Touch My Nylonswhich was written by the late Al Timothy. According to Timothys obituary, the song was also recorded by an artist known as The Charmer who subsequently emerged as Louis Farrakhan - currently leader of The Nation of Islam.

Jamaican Mento was another type of music which Shallit pioneered, and due to the lack of recording facilities in Jamaica the earliest recordings were made in London using Jamaican musicians, for example: Louise (Miss Lou) Bennetts Melodisc 78 Bongo Mandates from 1949, was recorded in London, and is possibly the first ever Rastafarian record.

In 1952 Jamaican entrepreneur Stanley Motta started making his own recordings in Kingston, inspired by Bertie King, an ex Alpha School Musician who had been resident in the UK since 1938 and was well known on the British Jazz circuit. King had released a few British recorded Mento records in the UK on his Limbo label, and when he returned to Jamaica in the early 1950s he suggested to Motta the idea of setting up his own recording facility and producing his own records for sale to the local JA market as well as exporting to the UK - in direct competition with neighbouring Trinidad, which was achieving much international acclaim for Calypso. "

The Blue Beats - Kiss The Baby
Posted by Wastedpapiers at 12:25 AM

Thank you from NYC. Can't get these here.

Red Price was a tenor saxophonist from Liverpool who was probably best known for his work with Ted Heath. He also played with Lord Rockingham's XI of "Hoots Mon" infamy.

One of the very few white acts on Blue Beat, to be sure... Mickey Finn & The Blue Men, an early Jimmy Page group, was another.