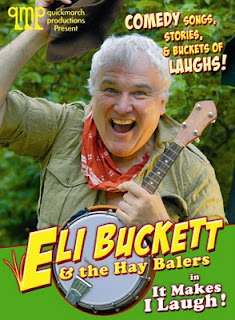 A CD from one of my contacts that I've had a few years safely locked away in the cowshed. Maybe it should have stayed there? Anyway I thought I would give it an airing as you have all been so good and deserve cheering up ( is that the right phrase? ).
I dont know much about Eli but heres a blurb about a show he does-

It Makes I Laugh will feature Eli and his band The Haybalers in an evening of comedy songs, stories and good natured country humour.

Rod has performed the character in theatres and clubs across the country and internationally, with tv and radio appearances and even released a single, The Yodelling Cockerel.

“People can come to the show and expect a lot of fun and a really good laugh,” said Rod.

“I’ve been performing as Eli for several years. If you split me down the middle, I’m a quarter Rod and three quarters Eli Buckett.


“It’s a good old West country show, with buckets of laughs,” he said. "

Eli Buckett - Her Romeo Just Walked On By

Eli Buckett - When I'm Cleaning Windows (Cowsheds)
Posted by Wastedpapiers at 3:57 AM

A wonderfully absurd name. It wasn't his real name surely?

No, no, not SHIRLEY, surely!

No it's Rod Scriven which sounds like a made up one too!