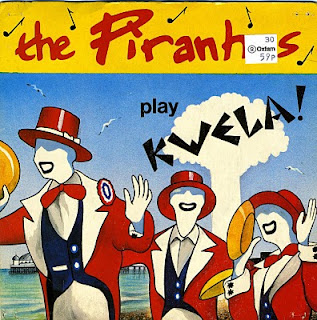 A 3 track 45 on the Sire label from 1980 I found in a charity shop in Crewe the other day. I vaguely remember seeing the Piranhas ( from Brighton ) play live at a pub in south London in about 1979. Very good they were too. Tom Hark was a medium sized hit but they didn't do much after that as far as I know.

"They were formed in 1977, and were originally part of the Brighton punk scene, first coming to prominence when DJ John Peel started playing their single "I Don't Want My Body" on his BBC Radio 1 programme, but achieved their biggest success with their cover version of the South African kwela song "Tom Hark". This had been an instrumental hit in 1958 for Elias & His Zig Zag Jive Flutes, and had already been covered in a ska style by Millie Small. With new lyrics written by the band's frontman "Boring" Bob Grover, it was a Top 10 hit in the UK in 1980.[1] It was the first song to feature on BBC Television's pop music programme, Top of the Pops, when it returned in 1980 after being blacked out for several months by industrial action. It also became a popular chant amongst British football fans the tune being used for songs such as "Premier League, You're Havin' A Laugh". It is also popular at limited-overs cricket games, often being played when a boundary is hit, and the tune was also used in the novelty World Cup song "We're England", performed by the presenters of the radio station talkSPORT with adapted lyrics for the 2006 FIFA World Cup Finals. Two years later the band's version of Lou Busch's "Zambesi" - produced by Pete Waterman - was a Top 20 hit in the UK Singles Chart.

The band were however not involved with a song that entered the UK charts in 2005, a remake of their biggest hit entitled "Tom Hark (We Want Falmer)", recorded under the name of Seagulls Ska, featuring Brighton resident Attila the Stockbroker and members of the ska band, Too Many Crooks. This was to help raise money for a new stadium for Brighton & Hove Albion F.C. (nicknamed "The Seagulls") at Falmer.

"Boring" Bob Grover still lives in Brighton, and is currently gigging around the UK with his new band 'Dates'. They released their debut album, First Party, Fire and Theft on Hah! Records in March 2007.

Guitarist Johnny Helmer went on to become a songwriter. He is best known for writing lyrics for Marillion's second incarnation with Steve Hogarth after the departure of Fish. He also published a novel entitled Mother Tongue in 1999. As a day job, he works in marketing for a Brighton company (as of 1999)." 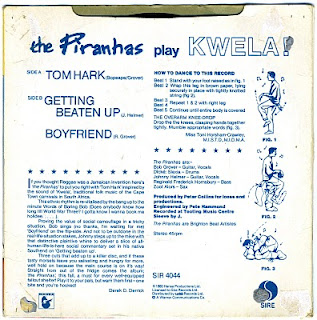 Posted by Wastedpapiers at 9:14 AM

I've got this in collection somewhere. Mix of Madness and Ian Dury. Think the instrumental section was used in an advert a couple of years ago.

Yes, it's very much of that era - 2-Tone meets Punk. Good live band . I remember Steve Frost the comedian was there and his comedy partner whatever his name was. I think his sister was going out with a freind of mine- anyway we went back to his flat afterwards for coffee and some wacky backy.

Great band. Never saw them live though but as you say, very much of that era.
I used the Tom Hark song, changing the lyrics wildly, as song me and the kids would sing when going to Hockley Woods.

'Slides and Swings and climbing frames,
were going the woods to play some games,
fun and games in the woods,
a little of what you fancy always does you good'