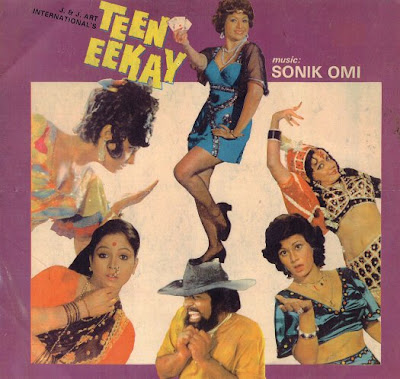 A wonderful Bollywood Lp found at Brick Lane in East London some years ago. It was featured once before on the infamous 356 Days project in 2003 so time to dust it off and give it another play.
The cover of this album is very 60's but the date says 1978. Made in Dum Dum, India by EMI. Manufactured and distributed by the Gramaphone Company of India Ltd. Its the soundtrack of a film called TEEN EEKAY produced by the unlikely named J& J ART INTERNATIONAL. This track by SONIK OMI stands out like a sore thumb as the others are very much your typical Bollywood fodder and sung by stalwarts such as Asha Bhosle and Usher Mangeshkar and written by Sonik Omi and a posse of people. This track by OMI is written by someone called Joginder. It's that mixture of a thousand violins wailing away and OMI's amazing growling vocal that really set this track apart from the rest of the songs here. What on earth could he be singing about with such animal relish and abandon? One thing is for sure - once heard, never forgotten!


These Send Space files are available for seven days or until exhausted.
Posted by Wastedpapiers at 8:01 AM

do you have any greek bouzouki/folk music, with vocal?