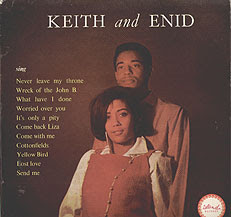 I've had this in my collection for many years but can't remember where I bought it for 35p - probably a junk shop in Limehouse. One of the very first releases on Chris Blackwell's Island label in 1963. Director of music - Ernest Ranglin, who probably plays guitar on some tracks here.

Keith And Enid - Wreck Of The John B

Keith And Enid - Come Back Liza

Keith And Enid - Come With Me


These SendSpace files are available for seven days or until exhausted.
Posted by Wastedpapiers at 12:50 PM

Very nice and sweet! Thank you.

Very nice record indeed! Thanks for sharing it.

Very nice of you to comment! Much appreciated IB and ravel.

AAAAH! I've been looking for this record forever! Please repost it. It goes for exorbitant sums these days.

Thanks David. If I find it again in my very muddled record collection I will.

oh man thanks so much.

Unknown said...
This comment has been removed by the author.
8:06 AM

PLEASE REUP FILES HAS EXPIRED LOVE YOUR BLOG THANKS IN ADVANCE

Thanks. Its long overdue for re-post and if I find it I will.

Still desperate to hear all this album again. Any possibility of a re-up?

Sorry, this record is a little illusive to find but I'll have another look tomorrow. Fingers crossed!