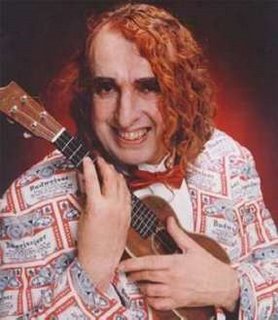 It's 12 years since Tiny Tim's death on 30th November 1996, so as a tribute here a few songs from one of his later albums.

"Tiny Tim already had something of a cult following around New York when he appeared in the film You Are What You Eat. This led to a booking on Rowan and Martin's Laugh-In, an American television comedy and variety show, which turned out to be his big break. Other appearances on the shows of Johnny Carson, Ed Sullivan, and Jackie Gleason followed, and he made a name for himself as a novelty performer. Apart from his extraordinarily high falsetto voice, his appearance—long curly hair, large nose, tall stature (he was six feet one inch), and clutching his relatively tiny ukulele—helped him stand out from the crowd.
In 1968, his first album, God Bless Tiny Tim, was released. It contained a version of his signature song, "Tiptoe Thru The Tulips", which was a hit when released as a single. The other songs displayed his wide-ranging knowledge of the American songbook, and also allowed him to demonstrate his baritone voice, which was less often heard than his falsetto. On one track, a version of "I Got You Babe", he sang a duet with himself, taking one part in falsetto, and the other in the baritone range. "On the Old Front Porch" extends this to a trio, including a boy (Billy Murray), the girl he is courting (Ada Jones), and her father (probably Murray again).
Another notable song was a cover of "Stay Down Here where You Belong", written by Irving Berlin in 1914 to protest the Great War. It is a powerful condemnation of those who foment war. (The comedian Groucho Marx also used this song as part of his own act, at least in part to irk the patriotic Berlin, who in later years tried in vain to disown the song)."


Tiny Tim - It's A Long Way To Tipparary

Tiny Tim - Those Were The Days

Tiny Tim - When You Wore A Tulip


These SendSpace files are available for seven days or until exhausted.
Posted by Wastedpapiers at 11:36 AM

His first album was a classic. I know someone who met him - such a nice man.
Bless you Tiny.

Thanks for dropping by Rob.