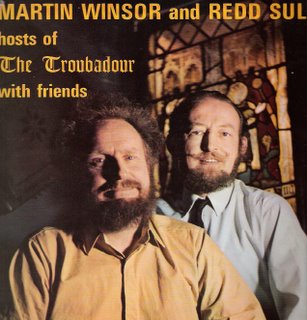 I found this in a charity shop last year. It comprises mostly of traditional folk songs but also two "novelty" songs included from the days of music hall.
Redd Sullivan and Martin Winsor started the Troubadour folk club in London in the 50's and many of the great names of folk played there. People like Bob Dylan, Tom Paxton, Shirley Collins, Martin Carthy etc.
Martin Winsor was born in Liverpool but moved to London where he became an authority on London folk-lore and dialect. He sang all kinds of songs from vaudeville , Irish folk songs, Scottish folk songs, sea shanties, pop songs and monologues. In fact anything that took his fancy became part of his extensive repertoire.
Redd Sullivan started singing in folk clubs in 1953 and well known on radio and television in the 60's when he appeared on Easy Beat, Roundabout, Country Meets Folk and Folk On Friday.
Also accompanying on this record are Jeannie Steel, Alastair McDonald and Ian Campbell.

Martin Winsor and Redd Sullivan - The Queen Of Hearts


These SendSpace files are available for seven days or until exhausted.
Posted by Wastedpapiers at 6:13 AM

Robin Hall and/or Sandy Payton (possibly) started the folk club at the Troubador, and when Sandy went back to the states, Robin kept it on for a while. When he left to tour elsewhere, Shirley Collins (now President of EFDSS) took it on; before leaving to go to the States with Alan Lomax to do some folk recording over there (see America Over the Water by Shirley C). At that point organisation of the club was taken on by Jenny Barton, who was the first to book specific singers, paying them with money taken on the door. It was when she left in autumn '64 that Redd and Martin took the job on.
Hope you don't mind the info,
Best regards,