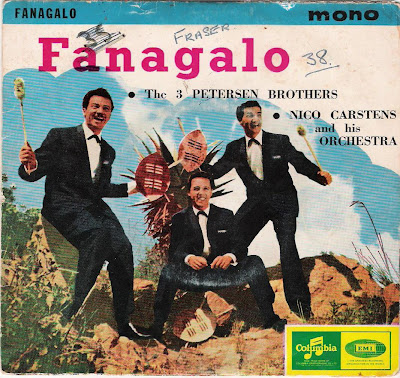 Found this curious EP in a charity shop today for 50p. I was first attracted to the amusing sleeve photo of the three men brandishing tiny Zulu shields and sticks!
It seems that the 3 Petersen Brothers are from one of the oldest theatrical families in South Africa and are really brothers. They have appeared constantly in every major town and city in South Africa the sleeve notes say. They have enjoyed a highly succesful season in London where they appeared on TV and on the radio. Accompanying them on this record is Nico Carstens and his Orchestra which sounds like three people to me! Released in the 60's I imagine on the Columbia label and record made in Southern Rhodesia which is now Zimbabwe.


These SendSpace files are available for seven days or until exhausted.
Posted by Wastedpapiers at 6:29 AM

Thanks milan. Glad you are enjoying your visit.