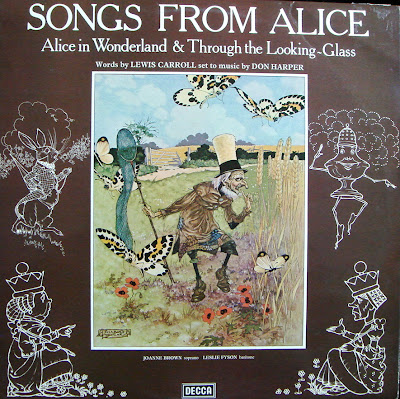 An Lp on the Decca label from 1978 I found recently in a charity shop for a couple of quid. Not really my cup of tea but intrigued to hear what they had made of Jabberwocky. The music was composed, arranged and conducted by Don Harper. Joanne Brown sings soprano and Leslie Fyson is the baritone. The musicians are Don Harper- violin and viola- Laurie Hollaway - keyboards - Arthur Watts - bass guitar/bass - Alan Sparkes - guitars - Stan Barrett - drums/percussion - Roy Willox & Manny Winter - woodwind - John Fletcher & Stephen Wick - tuba - Kenny Baker - trumpet/flugelhorn - Don Lusher - trombone/euphonium. Sound engineer - Aldo Bocca. Produced by Skip Humphries. Recorded at Eden Studios, London.

"Born in Melbourne in 1921, Don Harper showed an interest in music from an early age, learning to play the violin as a child. His formal study began at the New South Wales Conservatorium of Music.
In later years he would become the successful conductor of one of Australia's most popular big bands as well as being a prolific film and television composer.
In 1963 he emigrated to England, and found himself much in demand for television scores. During his seven-year stay in the country he provided music for World of Sport and Sexton Blake amongst other popular series.
However he is probably best remembered for providing music for the classic 1968 Doctor Who serial The Invasion.
Returning to Australia in 1970, Don Harper would regularly be seen performing on Australian television and on radio as well as in many jazz clubs across the country. He also toured with the Dave Brubeck Quartet.
After a second stint in England, during which he provided more television scores, Harper finally settled back at his home country of Australia in 1983 taking up the position of Head of Jazz Studies at Wollongong University's School of Creative Arts, a position he held until 1990.
His most popular recording was "The Hot Canary".
He died in 1999, aged 78."

Songs From Alice - Pig and Pepper


These SendSpace files are available for seven days or until exhausted.
Posted by Wastedpapiers at 7:55 AM

If you're curious about what can be done with Jabberwocky you may like to try and find a wonderful 60's psychedelic creation from the splendidly named Boeing Duveen & The Beautiful Soup. It should be possible to find it an mp3 file somewhere on the 'net - I think they called it Jabberwock - minus the 'Y'. It's well worth the effort of tracking it down.

Thanks for the hint spice- I shall lookout for it. Always keen to hear such oddities.

I grew up with this and have been trying to find a copy of it for years! This gives me hope; I'll keep looking. Thanks!

you are welcome lee. I have a spare copy for you! just found in a charity shop near me!

Really! I will buy it from you. How much?

I would love to get a copy of this record. I loved it as a kid and now I have two of my own. I have the sheet music but have lost the LP. Can you let me know if you can help. Thanks

Sorry, I dont have it anymore.

I just happened upon a Mint Condition LP of Songs From Alice. So happy that there is interest out there!