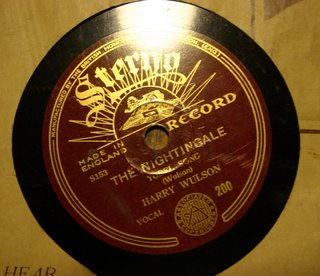 A very scracthed and worn 78 that I bought for 50p in a charity shop the other day with a few others. I'd not heard of Harry Wulson before but intrigued to hear what his "yodelling" sounded like. No luck finding out about the man himself but here's a short extract from Wikipedia about the origins of yodelling-

"Yodeling (or yodelling, jodeling) is a form of singing that involves singing an extended note which rapidly and repeatedly changes in pitch from the vocal chest register (or "chest voice") to the head register (or "head voice"), making a high-low-high-low sound. This vocal technique is used in many cultures throughout the world.
In Swiss folk music, it was probably developed in the Swiss Alps as a method of communication between mountain peaks, and it later became a part of the traditional music of the region. In Persian and Azeri Classical musics, singers frequently use tahrir, a yodeling technique that oscillates on neighbor tones. In Georgian traditional music, yodelling takes the form of krimanchuli technique. In Central Africa, Pygmy singers use yodels within their elaborate polyphonic singing. Yodeling is often used in American bluegrass and country music."


These SendSpace files are available for seven days or until exhausted.
Posted by Wastedpapiers at 12:45 PM