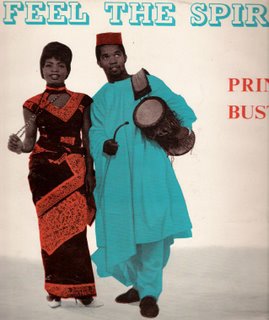 A rather battered and scratchy copy of "Feel The Spirit" by Prince Buster on the Blue Beat label. Released in 1963. Accompanied by various backing bands including the Les Dawson Blues Unit, Drumbago All Stars and Rico Rodriquez Blues Band.

"Cecil Bustamente Campbell was born on the island of Jamaica on May 28, 1938, the son of a railway worker. While still in his teens, Campbell simultaneously pursued two quite separate careers -- boxing and singing. Eventually, he'd give up the former, a talent he honed as a child leading a gang in one of Kingston's toughest neighborhoods, although it would hold him in good stead once he opened his sound system. He made his singing debut at the Glass Bucket club in the mid-'50s and fronted a number of now long-forgotten groups. Several of them included drummer Arkland "Drumbago" Parkes in their lineups and the two became friends. The drummer provided the introduction to Coxsone Dodd, not yet a producer, but at the time running a hot sound system in competition to another businessman soon to turn producer, Duke Reid. Dodd employed the young singer not for his vocals, but for his fists, as a security guard cum Guy Friday. By 1959, the young Buster understood the sound system business inside and out and set off on his own. He began by opening a record store, Buster's Record Shack, and then set up the Voice of the People sound system. "


Prince Buster - Wash All Your Troubles Away


These SendSpace files are available for seven days or until exhausted.
Posted by Wastedpapiers at 1:05 AM

What does "sound system" mean in this frame of reference?

From what I understand a "sound system" is a DJ and record playing decks and massive speakers that travel around playing music at parties, functions, concerts etc.