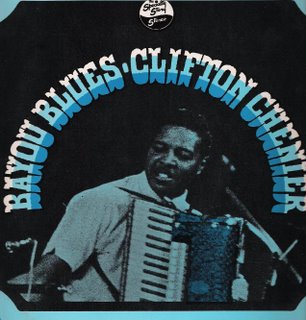 A flea market find of a few years ago, probably Brick Lane. It was released in 1972 on the Speciality label.

"Clifton Chenier (June 26, 1925 - December 12, 1987) a native of Opelousas, Louisiana was an eminent performer of zydeco music, a blend of Cajun and Creole music with R&B, jazz, and blues influences. He played the accordion.
Chenier's career began in 1954, when he signed with Elko Records and released "Clifton's Blues", a regional hit. His first hit was soon followed by "Ay 'Tite Fille (Hey, Little Girl)" (cover of Professor Longhair), which received some mainstream success. With the Zydeco Ramblers, Chenier toured extensively and soon signed to Chicago's Chess Records, followed by Arhoolie. His popularity peaked in the 1980s, when he won a Grammy Award, the first Creole to do so.
Chenier is also credited with redesigning the wood and crimped tin washboard into the frottoir, an instrument that would easily hang from the shoulders. Cleveland Chenier, Clifton's older brother would find equal popularity for his ability to manipulate the distinctive sound of the washboard by rubbing several bottle openers (held in each hand)along its ridges.
Clifton Chenier traveled throughout the world extensively with his RED HOT LOUISIANA ZYDECO BAND.
Chenier died of kidney disease in 1987 and was buried in All Souls Cemetery in Loreauville, Iberia Parish. Fortunately his son Clayton, CJ Chenier is carrying on in the zydeco tradition with a touring band and quality album releases."

Clifton Chenier - The Things I Did For You


These SendSpace files are available for seven days or until exhausted.
Posted by Wastedpapiers at 1:06 PM

I love all that Zydeco accordion based r&b stuff and Clifton Chenier is one of the better exponants I think. I don't recall that particular song la peregrina but will look out for it. Cheers!