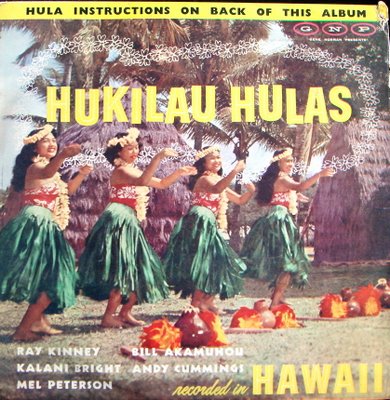 A LP from 1958 on the Vogue label. Amusing instruction on back of sleeve on how to do the Hula along with the tunes. A variety of artists here singing old favourites including Bill Akamukou, Ray Kinney, and Mel Peterson.

"The music of Hawai`i includes an array of traditional and popular styles, ranging from native Hawaiian folk music to modern rock and hip hop. Hawaii's musical contributions to the music of the United States are out of proportion to the state's small size. Styles like slack-key guitar are well-known worldwide, while Hawaiian-tinged music is a frequent part of Hollywood soundtracks. Hawaii also made a major contribution to country music with the introduction of the steel guitar.[1]
Traditional Hawaiian folk music is a major part of the state's musical heritage. The Hawaiian people have inhabited the islands for centuries and have retained much of their traditional musical knowledge. Their music is largely religious in nature, and includes chanting and dance music. Hawaiian music has had an enormous impact on the music of other Polynesian islands; indeed, music author Peter Manuel called the influence of Hawaiian music a "unifying factor in the development of modern Pacific musics."


These SendSpace files are available for seven days or until exhausted.
Posted by Wastedpapiers at 1:45 AM

I was born in 1958 and today is my birthday, I hope you don't mind me using these three tracks to lend atmos to my party this evening....
:-)

Happy Birthday outaspaceman - be my guest!