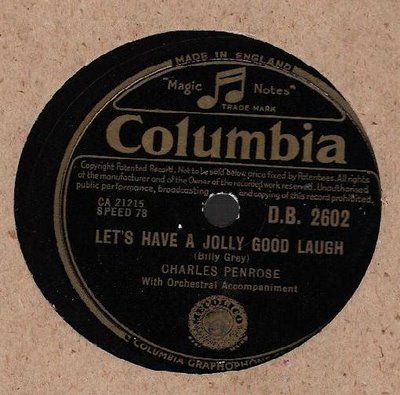 Another 78 from my small collection of shellac found at flea markets and charity shops etc. Charles Penrose was most famous for his "Laughing Policeman" which turns up time and time again on compilations of novelty songs and songs for children. It was forvever being played on Junior Choice on BBC radio during the 50's and 60's. He did however make many more "laughing songs" which were every bit as good ( or bad, depending on your humour! ) and it's a shame the others have been neglected.

"Charles Penrose born in Biggleswade created a unique selection of comical & witty records between 1911 and 1933, for various labels, originally played on wind-up gramophones. The Laughing Policeman, made in 1926, became a cult classic in the 50's, 60's & 70's on the BBC programme Children's Favourites and is still made use of by advertisers. I can recognise his Biggleswade accent and every word is clearly understood. He was living at Putney in 1901 with his wife Hetty and must have appeared at London music halls. During the 1930's he had small parts in quite a few British films and was a regular radio performer when everyone listened to the BBC. I remember his popular wartime radio programme Down at the old Pig & Whistle and my father telling me that he was born in Biggleswade. His gramophone records are now collector's items and much sought after."


These SendSpace files are available for seven days or until exhausted.
Posted by Wastedpapiers at 8:54 AM