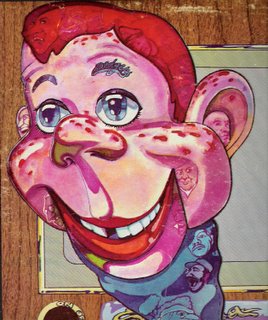 "The Howdy Doody Show was one of the first and easily the most popular children's television show in the 1950s and a reflection of the wonder, technical fascination, and business realities associated with early television. While Howdy and his friends entertained American children, they also sold television sets to American parents and demonstrated the potential of the new medium to advertisers.

The idea for Howdy Doody began on the NBC New York radio affiliate WEAF in 1947 with a program called The Triple B Ranch. The three Bs stood for Big Brother Bob Smith, who developed the country bumpkin voice of a ranch hand and greeted the radio audience with, "Oh, ho, ho, howdy doody." Martin Stone, Smith's agent, suggested putting Howdy on television and presented the idea to NBC televi-sion programming head Warren Wade. With Stone and Roger Muir as producers, Smith launched Puppet Playhouse on 17 December 1947. Within a week the name of the program was changed to The Howdy Doody Show."

A strange record on the the Leslee label from the 60's I would guess by the graphics. A weird mixture of newsreel from the 50's and 60's and cut between songs and segments of a puppet show for children! Not quite sure who it is aimed at. Certainly a curiosity and I uplaod both sides here for your bewilderment!


Howdy Doody Time - Side One


These SendSpace files are available for seven days ot until exhausted.
Posted by Wastedpapiers at 9:35 AM

Michael, This seems to be a mash-up of a few different Dickie Goodman records along with recordings from The Howdy Doody Show.

I remember hearing the Spaceman interview (The Flying Saucer Parts 1 & 2) on the radio on Golden Oldies weekends during the summer months when I was a kid. Flying Saucer was first recorded by Bill Buchanan and Dickie Goodman on the Luniverse label in 1956. Other versions were released as the years went by. Lots of copywrite infringement problems with these recordings. Your record could be another Dickie Goodman but I am not sure.

I must say it has all the earmarks of a "drug" record. A drug record was any album that was fun to listen to at college when you were stoned.

Thanks for dropping by la peregrina and for all the info and links. Much obliged. I imagine that being "stoned" would enhance your listening pleasure of this record ten fold!