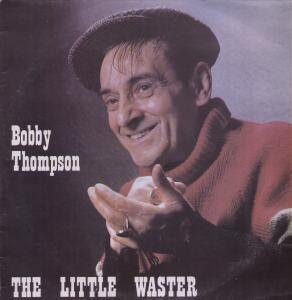 I found this today in the Age Concern shop for 75p. The accent is a bit hard going at times and one can see why he really didn't mean much outside of his North East England patch.

"Famous for his broad North-east accent, self-deprecating humour and mastery of the mother-in-law joke, Thompson was affectionately known as The Little Waster due to his short stature. His most famous outfit was a worn out stripey jumper and flat cap. His ever-present Woodbine cigarette stub, hanging from the corner of his mouth, was also an integral part of his on-stage persona.

His attempts to move beyond North East England were limited by his accent and the regional bias of his humour, although he did enjoy some success with the BBC show, Wot Cheor Geordie, and with regular appearances on Sunday Night at the London Palladium."

He was also renowned for his problems with the tax man. He incorporated this in his stage act.

Problems with drink, finances and his health affected his career in the 1970s, but he remained a North East favourite, particularly on the club scene, until shortly before his death.


These SendSpace files are available for seven days or until exhausted.
Posted by Wastedpapiers at 6:23 AM

There is a new Bobby Thompson site run by his son keith that has his CD's and DVD's. It's at www.bobbythompsonthelittlewaster.com