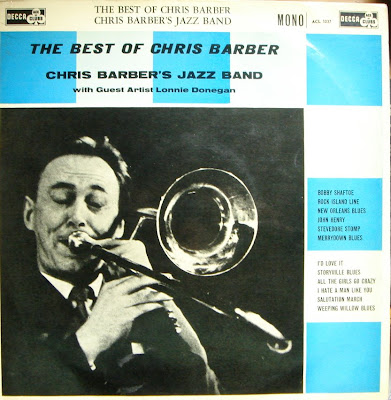 An LP on the Decca "Ace Of Clubs" label from the late 50's with songs from guests Lonnie Donegan who also plays banjo on some tracks and Ottilie Patterson.

"British jazz trombonist Chris Barber celebrated his 50th year as a bandleader in 1999. Inspired by the King Oliver Creole Jazz Band, Chris formed his first Barber New Orleans Band in 1949 at the age of nineteen. In 1953, along with Monty Sunshine and Lonnie Donegan, he joined forces with Ken Colyer. Then, with the replacement of Colyer by Pat Halcox, Ken Colyer's Jazzmen became Chris Barber's Jazz Band in 1954 and has been one of Europe's most successful traditional jazz bands ever since.
Over the years, Chris Barber's Jazz Band evolved into the Chris Barber Jazz and Blues Band, a rich eight-piece group, blending brass, reeds, and electric guitar into a unique and unmistakable mix of blues and jazz. And despite being 'on the slide' since 1949, having performed over 10,000 concerts and made thousands of recordings, the Chris Barber Jazz & Blues Band keeps marching on, right into the 21st century. At the end of 2001 Chris extended his band with three more musicians into The BIG Chris Barber Band."


These SendSpace files are available for seven days or until exhausted.
Posted by Wastedpapiers at 3:38 AM