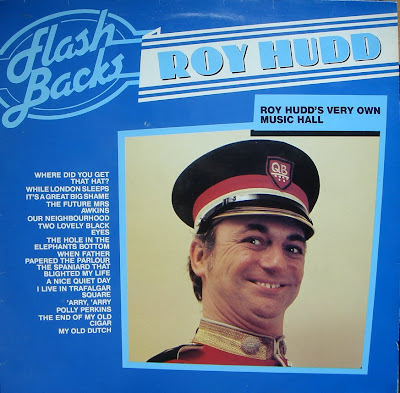 This LP is on the Flash Back series on Precision Record label from 1976.

He broke into TV appearing on Not So Much A Programme, More A Way of Life, but found wider fame with 1969’s The Roy Hudd Show.

Since 1975 The News Huddlines has had an amazing run on Radio 2, and is something of an institution. Although it's currently off-air, it will be back next year.

Roy's work as a dramatic actor in television has also won him praise. Dennis Potter's Lipstick on your Collar proved a huge success. This led to his most endearing dramatic role, again written for him by Potter, that of Spoonerism-afflicted Ben Baglin in Karaoke. "
So says the BBC website of profiles of the stars.


Roy Hudd - Where Did You Get That Hat?

Roy Hudd - The Hole In The Elephant's Bottom


These SendSpace files are available for seven days or until exhausted.
Posted by Wastedpapiers at 6:43 AM

oh can you please pleaseeee upload those roy hudd songs again?
thank you

I will muxu- if I have time today or maybe tomorrow.

thank you very much!

hi, i dont mean to trouble you but would you be so kind as to re-post 'where did you get that hat' from roy hudd? you dont have trouble yourself with other songs if you are indeed very busy. i just need that one song
thank you =)

I'm afraid I looked for this record and couldnt find it. I dont have a sytsem and they are all jumbled up so it could be anywhere!
I will try again later.