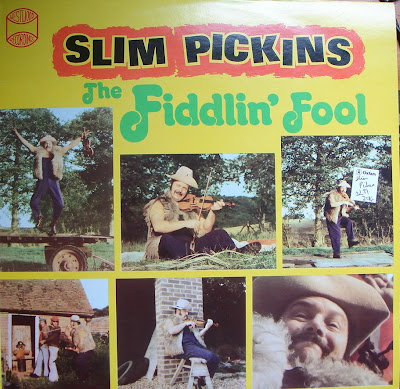 Found this LP today at the Oxfam in Chester for a couple of quid ( three actually ) which is more than I would usually pay but I was intrigued by some of the song titles and the toxic green vinyl! Also it was signed by Slim and dedicated to someone called Hazel or maybe even Hank? Not to be confused with the american film star of the same name!

Not much to be gleaned about him on the tinternet but he still gigs around the Midlands it seems. This album is on the Westwood Recordings label in Wales and came out in 1975. It reminds a bit of The Two Ronnies when they did that spoof C&W act "Jahosophat & Jones". A nice mixture of comedy and country and western.
Other musicians on the Lp are Stewart Barnes - Lead guitar, acoustic guitar. Steve Hughes - Bass. Alan Holmes - Drums, backing vocals. Jeannie Denver - Backing vocals. Tony Cervi - Piano and an unkown ukulele player. On the sleeve nots it states "None of the musicians have been seen since".

Slim Pickins - Make Me A Star


These SendSpace files are available for seven days or until exhausted.
Posted by Wastedpapiers at 8:27 AM

Excellent find! Slim is credited as a contributor to this Tony Best album, and played in Shrewsbury earlier this year.