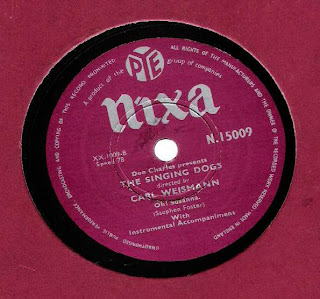 Another 78 from the boot on Sunday. I remember this oddity being played on Children's Favourites on the radio when I was a nipper.

"Carl Weismann - Danish legendary pioneer bird voice recording engineer, working for the Danish State Radio in Copenhagen - HATED dogs!
Yeah, well - he hated their barking spoiling every other of his recordings of singing birds - he became a master in cutting them out of his bird tapes - in those days - the 50's - there was no other way to do it than with a pair of scissors!
So he ended up with two piles of tapes - one with bird voices and one with dog voices.
The dogs really were doomed to be thrown out - but then Carl got an idea! He cut together a tape of various toned dog barks set to the music of 'Jingle Bells'.
He had no further intentions, than it might be fun for a Danish children radio show.
HOW it in 1955 ended up on a 45 rpm with 3 other tunes 'Patty Cake', 'Three Blind Mice' and 'Oh Susanna' as a four-tune medley - I simply don’t know. But the disc was released by RCA in USA and sold 500.000 copies.
Release in Britain around the same time was on Pye-Nixa label, on a 78 rpm disc.
In Sweden it has been seen on the Metronome label.
Howard Smith, host of a four-hour talk-music show over WABC-New York FM outlet, WPLJ who liked to play anything weird or new on his program first started playing the original 45 rpm disc at Christmas 1970.
Someone found it in a Boston used record store and gave it to the father of his girlfriend. Smith played the disc for many weeks prior to Christmas 1971 and told some RCA executives at a record party about the public response to his playing their old record. RCA unearthed the original parts at their plant in Indianapolis and rushed the disc into release in early December 1971.
In 3 weeks alone it sold 420,000 copies, the combined sales through the years thus making it a million seller."


These SendSpace files are available for seven dyas or until exhausted.
Posted by Wastedpapiers at 11:28 PM