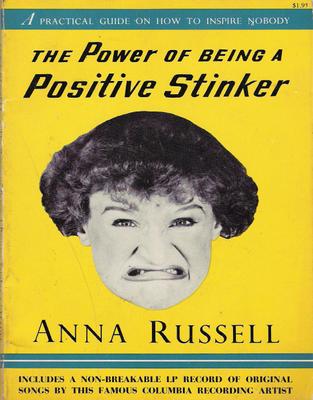 I found this book by Anna Russell at a flea market in the car park of Southend United football club some years ago. At the time I was drawn to the grimacing face on the cover and was delighted to find a pocket in the back of the book contained a 45 r.p.m. disc featuring two songs and a skit about learning to play the french horn.
Anna Russell was born in London in 1911 and attended the Royal College of Music. She pursued the concert career as a lyric soprano and when the war broke out in 1939 she and her family moved to Canada. She appeared on local radio stations and entertained the troups and was soon writing and arranging her own songs. She moved to New York to further her career but wasn't getting very far so took the bold step in 1948 of hiring the New York Town Hall with a capacity of 1,500. Only 250 of her friends turned up but the critics gave her some good reviews. In 1951 she tried again and this time the venue was almost full and the critics acclaimed her as one of the funniest women of her generation. She has sung with many great orchestras and in many operas and her own Broadway show.
She has since retired and moved to Australia.


These SendSpace files are available for seven days or until exhausted.
Posted by Wastedpapiers at 6:21 AM

you have got a very nice blog ,i am have some stuff like cranes for sale check it out.