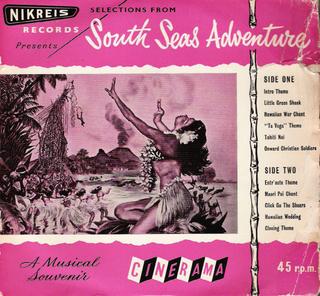 This curious "souvenir" EP playing at 45r.p.m. is another find from Brick Lane. Its taken from the soundtrack of a "Cinerama" film of the 50's or early 60's I would guess. I just love the small clips of Hawaiian music here and the "Click Go The Shears" song which sounds anything but authentic!
Here's a bit about Cinerama I found which describes how inventor Fred Waller discovered this "breakthrough" technology and more can be found HERE.

"It used three cameras and three projectors on a curved screen 146° deep. Making an anagram of the letters in “American,” he called it “Cinerama”. Even in an industry up to its Mitchell magazines in hyperbole, its impact was staggering. Running only 13 weeks in one theater in New York, “This Is Cinerama” was the highest grossing film of 1952. Several more travelogues would follow, climaxed by two dramatic films co-produced with MGM in 1962. Cinerama, which had been rejected by all the majors as too expensive - however impressive it was - now created a landrush. When they saw its drawing power, every studio scrambled to come up with a copycat process. The 1.33 aspect ratio was dead and the widescreen era was on. Cinerama’s 3-panel glory days lasted only 11 years, but it has never been forgotten by anyone who saw it."

The only Cinerama film I saw was Stanley Kubrik's "2001- A Space Odessy" which seemed quite stunning at the time and it's sad that these films don't get to be seen anymore outside of film museums.

These Rapid Share files are accessible by scrolling down the page and clicking the FREE button. Wait at bottom of page for your file to appear (about 20 seconds).
Posted by Wastedpapiers at 12:38 AM

... it's sad that these films don't get to be seen anymore outside of film museums.

In England, yes. The U.S. has two of the three remaining cinerama screens. Check this out which says (in part):

"Currently, there are three places in the world still capable of showing three-panel Cinerama films: Seattle’s Cinerama Theatre, the Cinerama Dome at ArcLight Cinemas in Los Angeles, and a screening room in a museum in Bradford, England."

The site at the URL above is all about the Seattle Cinerama which happens to be two blocks up the street from me. I can assure you it is clicking along just fine and has a very clever screen setup that allows it to show "regular" movies as well as the cinerama features.

Thays good to know howlin'. Thanks for the info. It would be nice to get over to Bradford sometime to see the one there.

There used to be one in Houston. I have a bunch of old Cinerama ephemera. Will post it on my blog sometime for you to see.

Thanks Angelica. I should like to see those. Its a shame the Cinerama theatre in Houston closed down.

Hi Michael. I remember these from Glasgow. Colliseum Cinerama. The film was How the West was Won. Nice One.

Thanks outsider. I think I've seen "How the West Was Won" on TV but I imagine its fantastic in Cinerama!