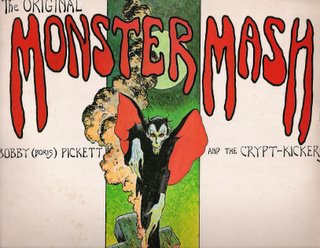 "Born Robert George Pickett on February 11th, 1940, Bobby was fascinated by horror movies as a child. By the time he was nine, he started to imitate Boris Karloff, whom he would see at the movie theatre that his father managed in Somerville, Massachusetts.

Following his discharge from the army in 1961, he moved to Los Angeles to try his hand at show business. As a member of a vocal group called "The Cordials" , he would do impersonations between songs, often using his impression of Karloff, which was a crowd favourite. His friend and fellow band mate, Lenny Capizi suggested that the pair try to take advantage of the novelty song craze that was happening in the early sixties by writing a tune around Bobby's Karloff imitation. It took nearly a year after the suggestion to get around to it, but when they did, the two worked out "The Monster Mash" in about an hour and a half.

To record their song, they approached producer Gary Paxton, who sang The Hollywood Argyles' hit, "Alley Oop". Pickett and Paxton, along with Leon Russell, Johnny McCrae and Rickie Page recorded the tune, and when the session was done, it was Paxton who came up with the idea of putting "Bobby 'Boris' Pickett and the Cryptkickers", on the record's label. Pickett also added all his own sound sound effects: the creaky door opening is a nail being pulled from a piece of wood, the boiling cauldron is Pickett blowing bubbles into a cup of water with a straw and the chains are him moving chains up and down. The song was recorded in just one take.

Gary Paxton took the tape to four major labels, who all turned it down. Not discouraged, he had a thousand copies pressed himself and started delivering them to radio stations across California. Soon, the Monster Mash was getting airplay and London Records, who had rejected the song earlier, called Paxton to sign a deal.

Eight weeks later, on October 20, 1962, the record hit number one, just in time for Halloween."

These Rapid Share files are accessible by scrolling down the page and clicking on the FREE button. Wait at the bottom of the page for your file to appear (about 20 seconds ).
Posted by Wastedpapiers at 5:00 AM

Aha, a Somerville guy :-).
Kool reading about all these people...great format too, Michael!

I must admit that didnt click with me the first time i read it Syl! Just shows you how slow I am sometimes! I guess all the best people come from Somerville eh! At least the interesting ones!

Another fine post. One of those novelty records that you cannot fail to like (if you are over fifty)!!!

I feel sorry for anybody who doesnt like this, however old they may be!