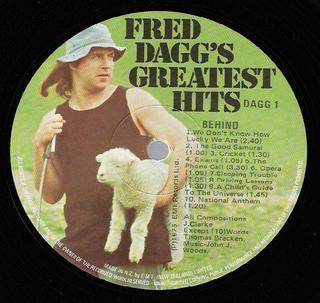 This is one of those records you just have to buy when you see it in a charity shop as New Zealand comedy aimed at sheep farmers is a very rare commodity around these parts. I knew nothing about Fred Dagg and still know very little. Here's what Wikipedia says about him-

"Fred Dagg is a fictional archetype satirist from New Zealand created and acted on stage, film and television by John Morrison Clarke. Clarke graced New Zealand TV screens as Dagg during the mid to late 1970s, "taking the piss" out of the post-pioneering Kiwi bloke and ‘blokesses’.
When Clarke first unveiled the character of Fred Dagg in recordings and on New Zealand TV in 1975, he became a national star and icon. Clarke also recorded a series of records and cassettes as Dagg, as well as publishing several books.
The Fred Dagg character is a stereotypical farmer and New Zealand bloke; clad in a black singlet and gumboots, and supposedly attended by numerous associates all named 'Trev'. One memorable expression was uttered whenever there was a knock at the door: "That'll be the door".
"Fred Dagg" first became a household name in New Zealand in 1975, with the release by Clarke (as Dagg) of two singles with EMI, "Traditional Air"/"Unlabelled", and "We Don't Know How Lucky We Are"/"Larry Loves Barry", with the latter making it to number 17 on the national charts.
An album called "Fred Dagg's Greatest Hits" followed and was a massive seller. Thirty years after its release this album remains one of New Zealand's all-time biggest selling records."

These Rapid Share files are accessible by scrolling down to the FREE button. Click on it. Wait and bottom of page for your file to appear (about 20 seconds).
Posted by Wastedpapiers at 6:08 AM

i think that the thing that i like best about this post is this quote "Thirty years after its release this album remains one of New Zealand's all-time biggest selling records."

It says a lot about the music scene in NZ more than anything else!
I expect they have a lot of interesting bands we never hear of. Split Ends and Crowded House are the only two that come to mind and the latter grew out of the former.

Yes but where can I GET the record? It's pure bloody Goon-style genius. Best bit is the flea-race Fred calls - a nailbiting battle to the death eventually won by the rank outsider "Daggy Boy". Wish I had a copy right now.

I would think you are better placed to find a copy in Australia Matt. Good huntin'!