The Chimes Family In The Ukraine 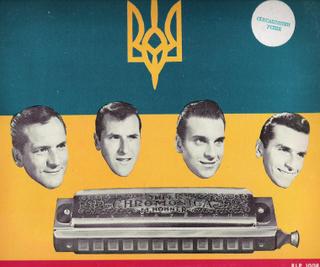 "The Chimes Family is a leading harmonic group with an inimitable style. It consists of Michael Chimes and his three sons, Gilbert, Craig and Michael Jr.
Michael Snr. at an early age was a member of the "Borrah Minevitch's Harmonica Rascals"> he has appeared in leading TV shows such as Ed Sullivan, Perry Como, Garry Moore and has been featured again and again on every major radio and TV network. His harmonica can be detected in most of the leading commercials. he has featured with prominent artists such as Harry Belafonte, Robert Russell Bennett, Keely Smith, the New Christy Minstrels, Johnnny Mathis and The Weavers and too many others to be listed.
The Three sons joiedn the act at the age of 6. This highly unusual family group has played all over the world and appeared in every major city in Canada."

This LP on the Request label was found at a boot sale recently. It reminds me of those old variety acts that you don't see anymore like the Morton Frazer Hamonica Gang and the The Three Ginx. Every week on the London Palladium they always seemed to have a juggler, and ventriloquist and a harmonica band!

The Chimes Family - Over The Bridge

These Rapid Share files are accessible by scrolling down the page and clicking on the FREE button. Wait at the bottom of the page for your file to appear (about 20 seconds).
Posted by Wastedpapiers at 6:50 AM

You must have a barn or a garage or a very large room full of odd old albums.
A bit like John Peel but with a weird twist!

A barn would be handy i must admit but most of my records are in a tiny box room that also serves as a studio upstairs. Constantly worried the weight of records will tip the house over to a strange angle!

O by the way Its JOHN PEEL day today on the radio they are celebrating with some concerts and sessions I think. I will tune in later.

Peter Hook of New Order was on Johnnie Walkers radio show talking about John Peel saying what a great man John was. Johnnie then suggested that we create another bank holiday in the Autumn as there isn't one and name it John Peel day.
Daft thought but nice.

I was hoping for more of the Fall live from the Queen Elizabeth Hall but just the one song it seems, though I've yet to listen to the 2 hours I recorded from the radio. Most of it seemed pretty dull which wasnt how I remember the Peel shows of my youth. I was abit mystified when he started playing rap and hard core mental though and my interest waned in the 90's. I listen mostly to Charlie Gillett, Andy kershaw and Mark Lammar now and more recently Tom Robinson on 6 Music.

The mp3 links are dead now :( Could you please reupload? Thanks a lot!

Sorry, the chances of finding this one are pretty slim and my interest in keeping this blog up to date has waned. Thanks for your interest.