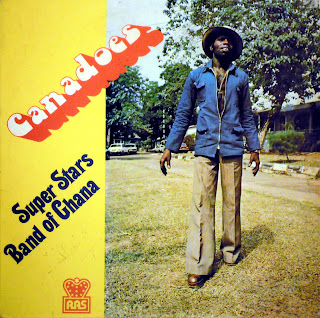 Another Rogers All Stars label LP from the archive. This one from 1979. Catchy highlife similar to King Sunny Ade and Prince Akekunle etc. Wikipedia says - "Highlife is a music genre that originated in Ghana in the 20th century and spread to Sierra Leone, Nigeria and other West African countries by 1920. It is very popular in Liberia and all of English-speaking West Africa, although little has been produced in other countries due to economic challenges brought on by war and instability. Highlife is characterized by jazzy horns and multiple guitars which lead the band. Recently it has acquired an uptempo, synth-driven sound (see Daddy Lumba). Joromi is a sub-genre. This arpeggiated highlife guitar part is modeled after an Afro-Cuban guajeo.[3] The pattern of attack-points is nearly identical to the 3-2 clave motif guajeo shown earlier in this article. The bell pattern known in Cuba as clave, is indigenous to Ghana and Nigeria, and is used in highlife." Tracks are as follows - 1. Oga Sorry 2. Esu A meresu Yi 3. Wawu Anaa?