Primas Stefan and his Royal Tziganes 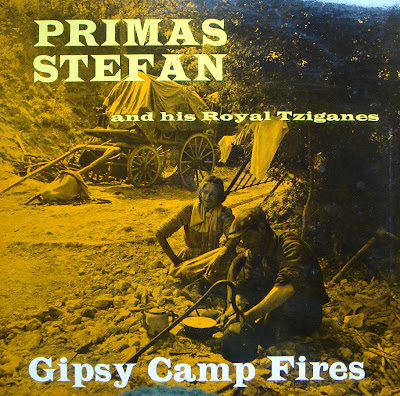 Another LP Ive had for a while on the World Record Club label from 1964. Seems to be a pet project by someone called Steven Staryk. Wikipedia Says - "Steven Sam Staryk, OC (born 1932 Toronto, Ontario, Canada) is a Canadian violin virtuoso. Born in Toronto, Ontario, Canada[3] of Ukrainian descent, he began his musical education as a child at the Harbord Collegiate Institute. He pursued further studies in the violin with Albert Pratz at The Royal Conservatory of Music (Toronto) and in New York City. As a renowned teacher, orchestral and chamber musician, and international soloist, he is considered to be the leading Canadian-born violinist of his generation. He is listed in The Encyclopedia of Music in Canada[4] and 23 international publications including The New Grove Dictionary of Music and Musicians. Awards include the Shevchenko Medal, the Queen's Silver Jubilee Medal, an honorary doctorate of letters from Toronto's York University, and arts awards from the Canada Council. In 1951, he was one of the Symphony six who were denied permission to enter the United States. He was runner-up to Salvatore Accardo in the International Competition for Musical Performers in Geneva, 1956. No first prize was awarded that year. Again, he was runner-up at the Carl Flesch International Competition in London where only one prize is awarded. He became concertmaster of the Royal Philharmonic Orchestra at the age of 24, the youngest ever, earning the title "king of concertmasters" from The Strad magazine. He went on to serve as concertmaster of the Concertgebouw, Amsterdam Chamber Orchestra, the Chicago Symphony Orchestra, and the Toronto Symphony Orchestra." Tracks are as follows - 1. Opening Theme 2. Sarba Pomperilor 3. Hora Lui Timosca 4. Utuoso Vasarnap 5. Kuroz Variations 6. Hora Lui Dobrica 7. La Foret

upload files online
Posted by Wastedpapiers at 12:33 AM