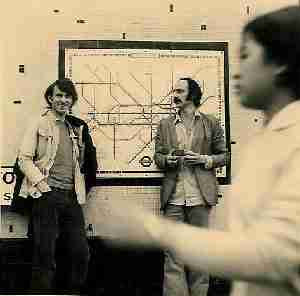 Two more Honky Tonk shows courtesy of John Mister who kindly sent me the remains of his HT Archive on some very cheap cassettes so please excuse the sound quality. The first is with guests Charlie Feathers, Buddy Knox and Jack Scott in the midst of a UK Rockabilly package tour. I think they recorded a live album at the Rainbow Theatre that year which was later released. I should check my own blog as it's on here somewhere! The second is with James Burton the session guitarist who has played with many of the great names in rock and country, including Elvis and Ricky Nelson. He was in town with the band backing Emmy Lou Harris who was touring at the time. As usual fascinating snippets of conversation and some great records. Wikipedia says of James Burton- "Born in Minden, the seat of Webster Parish, Louisiana, Burton moved to Shreveport with his family in 1949. He is self-taught, and was playing guitar from his childhood. By the time he was thirteen years old, Burton was playing guitar semi-professionally. A year later he was hired to be part of the staff band for the enormously popular Louisiana Hayride radio show in Shreveport. Burton left Shreveport for Los Angeles while in his teens after joining Ricky Nelson's band. In L.A., he made numerous recordings as a session musician. Burton created and played the guitar solo on Dale Hawkins 1957 hit song "Susie Q," a record that would become one of the Rock and Roll Hall of Fame's 500 Songs that Shaped Rock and Roll." Charlie Gillett - James Burton/ Rockabilly Special
Posted by Wastedpapiers at 7:02 AM

Since mentioning James Burton, I thought I would let you know about the book that I recently wrote and had published. It's called Rick Nelson: Rock and Roll Pioneer by Sheree Homer. Musicians and producers who worked with Rick are interviewed, and never before seen photos are featured. Amazon has it available as well as your local bookseller. Tell them to order a copy for you today. Thanks.

Thanks for the comment Sheree and good luck with the book.