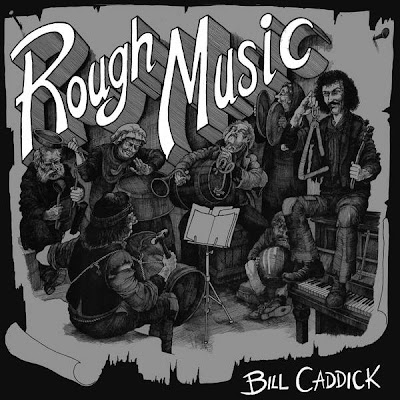 LP found at boot sale the other day for 35p- on the Park label from 1974. I was intrigued by the name and cover art. I was hoping for a jug band but turns out to be pretty much a finger in the ear traditional folk record but with some nice guitar playing and guest appearances by John and Sue Kirkpatrick and Magic Lantern. Wikipedia says - "Singing since the 1960s in folk clubs and festivals, in 1973 Caddick joined the street theatre group Magic Lantern, formed by Taffy Thomas and described by Mel McClellan on the BBC website as "legendary". He left Magic Lantern in 1975 to concentrate on his solo career, becoming well known as a festival artist in Britain and overseas. In 1977 he joined the Albion Band in the National Theatre productions of 'Lark Rise' and 'The Passion'. Caddick later collaborated with Tim Laycock and Peter Bond in a stage show and album about circus life, called "A Duck on his Head". About this time, he wrote songs for radio and TV, and performed his own songs in a film about the Tolpuddle Martyrs. From 1980 to 1987 Caddick was a member of the renowned folk-rock band Home Service. He continued to write and perform at clubs and festivals, albeit in a more low-key way than before as well as continuing his involvement with the National Theatre, writing and appearing in several plays which included "Don Quixote", and "The Mysteries" (an award winning trilogy performed in the West End, on TV and throughout Europe, as well as at the National). Currently (as at December 2009) Bill Caddick runs a folk club in his home village of Jackfield and, as well as his solo career, is a member of three groups: local band the Jackfield Riverbillies, ceilidh band All Blacked Up and a new venture as part of the Anne Lennox Martin Band.[3] His songs, such as "Unicorns" and "She Moves Among Men", have been recorded by numerous other musicians including June Tabor, Chris Foster, Alex Campbell, Christy Moore, Peter Rowan, John Kirkpatrick, Artisan, Coope Boyes and Simpson and The Yetties." Tracks are - 1. King Sun 2. Rought Band 3. Oller Boller 4. Winter Fair 5. John O'Dreams Bill Caddick - Side Two
Posted by Wastedpapiers at 3:23 AM

Oh, let's have side one as well.
Pleeeeeeeasssseeee!!!

I rarely upload whole albums . I don't have the time and the tracks featured are just meant as a taster. Sorry.