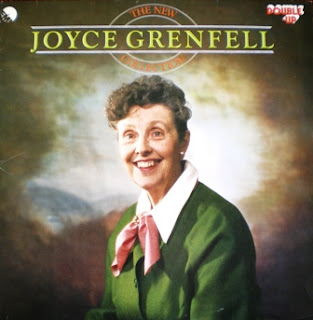 A double LP on the EMI label from 1978. A much loved comedienne from back in the days of sophisticated comedy and song that seems rather old fashioned and quaint now. Wikipedia says - "Born in London, Joyce was the daughter of architect Paul Phipps (1880–1953), the grandson of Charles Paul Phipps and a second cousin of Ruth Draper, and an eccentric American mother, Nora Langhorne (1889–1955), the daughter of Chiswell Langhorne, an American railway millionaire. Nancy Astor, née Nancy Langhorne, was her mother's sister and Grenfell often visited her at Astor's home, Cliveden. Joyce Phipps grew up around money and privilege. She had a London childhood and considered herself a "townie". Joyce attended the Francis Holland School in Central London, and the Christian Science School, Clearview, in South Norwood, and then she was "finished" in Paris where she attended Mlle. Ozanne's finishing school at the age of 17. In 1927, she met Reginald Pascoe Grenfell (1903–1993); they were married two years later at St. Margaret's, Westminster; they remained married for 50 years (until her death). She made her stage debut in 1939 in the Little Revue. In 1942 she wrote what became her signature song, "I'm Going to See You Today." During World War II, Grenfell toured North Africa, Southern Italy, the Middle East and India with her pianist Viola Tunnard performing for British troops. In 1989, her wartime journals were published under the title The Time of My Life: Entertaining the Troops. Her singing and comedic talents on stage led to offers to appear in film comedies. Although she performed in a number of films, she continued with her musical recording career, producing a number of humorous albums as well as books. As a writer at the BBC during and just after the war, she collaborated with Stephen Potter in writing the "How" series of 30 satirical programmes from How to Talk to Children to How to Listen. During the 1950s she made her name as a sidekick to such comedy greats as Alastair Sim and Margaret Rutherford in films such as The Happiest Days of Your Life (1950) and the St Trinian's series. She was also a member of the influential Pilkington Committee on Broadcasting from 1960 to 1962. Her fame reached as far as the U.S.A. and she appeared on The Ed Sullivan Show alongside Elvis Presley." Tracks are as follows - 1. Two Songs My Mother Taught Me 2. Artist's Room 3. Leonie 4. Security Song 5. Ferryboats Of Sydney 6. Committee 7. Come Catch Me Joyce Grenfell - Side Four
Posted by Wastedpapiers at 2:48 AM

Our own Maureen Lipman keeps her embers burning to this day. The monologue is a much underrated gag device and Lipman does several of JG's word for word.

Thanks for reminding me John. Yes, I actually won tickets to see Maureen Lipman do her Joyce Grenfell impression many years ago when we lived in London. We took my mother along and we all enjoyed it.