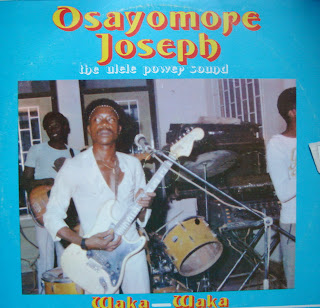 An LP on the Emotan record label from Nigeria (1982). One of a big stack of Afrobeat I bought in a junk shop in Stepney, East London where I lived for a while in the 70's and 80's. It may even come from Brick Lane flea market which was nearby and a regular haunt on a Sunday.

"Osayomore Joseph arouses too the same curiosity; due to his talent, his energy, his commitment, he calls back(reminds) without hesitating his elder son(brother), Fela. Its style, its musical game(set,play), draws its roots from the earth(ground) edo; but the culture and the language(tongue) edo are strongly influenced by the yoruba culture for centuries. By listening to Osayomore Joseph, we feel(smell) his(her,its) originality edo with its oriental impulses but the inheritance of Fela and the yoruba culture is quite obvious. This sensation can arrest(dread) in the evolution of the artist since its musician's stage(stadium) of the soil until its highlight of all over the world known national singer, as well as in its rhythmic game(set,play) and its instruments. The theme of the contesting, the posture of public polemicist, the rhetoric warrior or politics(policy), satyr, the irony, the stage setting and the parody, all this pulls the decoration(set) of a democratic kalakuta Republic version. Where from the subject of the walking(march), the fight, and especially the name of its firebrand-lighthouse: Osayomore Joseph Liberation Army."