The Music Of Cosmos 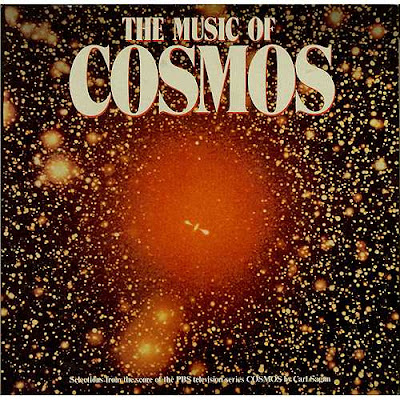 Found in a record shop in Chester today in the 50p box. I was drawn to the sleeve art I suppose rather than the music which is pretty much as you would expect from an 80's TV show - lots of popular classics, Vangelis and few atmospheric oddities like the Bulgarian chanting thrown in for good measure.

"Carl Edward Sagan ( /ˈseɪɡən/; November 9, 1934 – December 20, 1996) was an American astronomer, astrophysicist, cosmologist, author, science popularizer and science communicator in astronomy and natural sciences. He published more than 600 scientific papers and articles and was author, co-author or editor of more than 20 books. He advocated scientifically skeptical inquiry and the scientific method, pioneered exobiology and promoted the Search for Extra-Terrestrial Intelligence (SETI).
Sagan is known for his popular science books and for the award-winning 1980 television series Cosmos: A Personal Voyage, which he narrated and co-wrote. The book Cosmos was published to accompany the series. Sagan wrote the novel Contact, the basis for a 1997 film of the same name."

The Music Of Cosmos - Side Two
Posted by Wastedpapiers at 8:55 AM