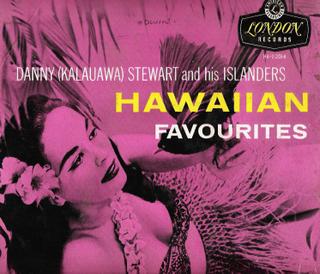 Another of those records you just have to buy for the sleeve alone. The music is quite good too despite playing safely in that middle of the road type Hawaiian "easy listening" vein that fans of this music seemt to love. I was once a member of the Hawaiian Tape Club which passed around compilations of exotic south sea island music and most of it was very dull - even duller than this! I sent round a few "novelty" tiki tapes to liven things up a bit but they met with scant response from the mostly fuddy-duddy members.
Heres a quote from the LP sleeve-

"The forces set in motion by the missionaries have made themsleves felt very strongly in the songs that Hawaii now sends out to the world. In the first place there is the effect of a people quite recently pagan very quickly civilised and nourishing beneath the surface an engaging naivete which gives to Hawaiian songs something of the quality of the calypso. But there is also a more direct influence, for the form of Hawaiian music is not ancient in origin but has been evolved and adapted over the last century. Even the Hawaiian guitar and ukulele are imported commodities, though the habit of running the fingers over the strings to give a singing intonation has been developed here more than anywhere else. As a final blow to those who dream of going native it must also be recorded that the form of the songs has been shaped most strongly by the swinging tempo of the hymns that those missionaries originally bought from new England and turned into the popular music of the islands."

Danny (Kalauawa) Stewart - Side One
Posted by Wastedpapiers at 12:37 AM

I have a couple somewhere. I'll try and upload some time.