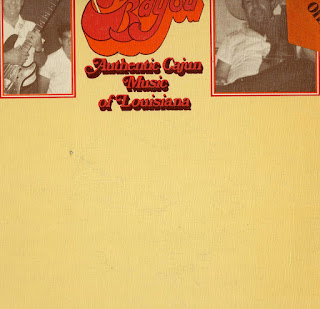 Another from the dusty attic pile - originally bought at Cheshire Street in East London in the 80's or 90's. A nice selection of Cajun tracks on the Liberty label from 1970 chosen by Mike Leadbitter to tie in with the publication of a book of the same name.

"The first recorded Cajun song, "Allons à Lafayette" (Let's go to Lafayette) was recorded in 1928 by Joe Falcon and Cléoma Breaux. Standard versions of songs started to emerge due to the increase in the availability of phonographs. Some of the earliest recordings of Cajun music that exist were done in Louisiana during the late 1920s by noted historian and American folklorist Alan Lomax.
Many notable musicians during the time period include Joe Falcon and Cleoma Breaux, Amédé Ardoin, Breaux Brothers, Segura Brothers, Leo Soileau accompanied by accordionist Mayuse (Maius) Lafleur or Moise Robin, and Dennis McGee accompanied by fiddler Sady Courville or Ernest Frugé.
By the mid-to-late 1930s, a large influx of English speaking people came for the oil fields in Southwest Louisiana. Also, a large migration of French speaking Cajuns expanded to Texas. It was common for performers to sing in both French and English and borrow heavily from the popular country music and Texas swing music on the radio.
Notable musician Harry Choates recorded the first national hit with a Cajun song, Jolie Blonde in 1946. Other groups from the 1930s and 40s that were able to garner national attention include Leo Soileau and His Four Aces, the Hackberry Ramblers, Happy Fats and the Rhythm Boys, the Alley Boys of Abbeville, the Dixie Ramblers, and J. B. Fuselier and His Merrymakers. Choates' Jolie Blonde, and Hank Williams' song Jambalaya (On the Bayou), which used the melody of the Cajun song Grand Texas, spawned regional and national interest in the music, opening the door to Nashville country music careers for Cajun musicians Jimmy C. Newman, Rufus Thibodeaux, Doug Kershaw, Jo-El Sonnier, and others."


From The Bayou - Side Two
Posted by Wastedpapiers at 8:51 AM