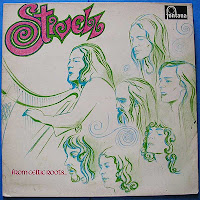 Curious mixture of Breton harp and electric guitars from this 1973 LP on the Fontana label. The songs work best for me when unencumbered by noisy rock musicians and the real folk shines through.

"Alan Stivell (born Alan Cochevelou January 6, 1944) is a Breton musician and singer, recording artist and master of the celtic harp who from the early 1970s revived global interest in the Celtic (specifically Breton) harp and Celtic music as part of world music.


Alan was born in the Auvergnat town of Riom. His father Georges (Jord in Breton) Cochevelou was a civil servant in the French Ministry of Finance who achieved his dream of recreating a Celtic or Breton harp in the small town of Gourin, Brittany. In 1953, Alan began playing the instrument at the age of nine under the tutelage of his father and Denise Megevand, a concert harpist. Alan also learned Celtic mythology, art and history as well as the Breton language, traditional Breton dance and the Scottish bagpipe and the bombarde, a traditional Breton instrument, from the oboe family. Alan began playing concerts at eleven years and studying traditional Breton, English, Irish, Scottish, and Welsh folk music, also learning the drum, Irish flute, and tin whistle. He competed in and won several Breton traditional music competitions in the Bleimor Pipe band. Alan spent his childhood in Paris, with its cosmopolitan influences from France, Algeria, Morocco and elsewhere. But he fell in love with Breton music and Celtic culture in general, and often went back in his teens to Brittany.
Alan's first recording came in 1960 ("Musique gaelique"), a single that was followed by the LP Telenn Geltiek in 1964. He already recorded solo harp and harp backing singers in 1959 with Breiz ma bro ("Brittany my country") and a Mouez Breiz EP ("Voice of Brittany") with the female singer Andrea Ar Gouilh. His stage name, "Stivell", means "fountain" or "spring" in Breton. This name refers both to the Breton renewal and to his surname "Cochevelou" (an evolution of kozh stivelloù, "the old fountains")."


Alan Stivell - Side Two
Posted by Wastedpapiers at 12:26 AM