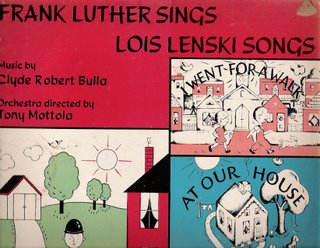 Found a couple of years ago in a charity shop in Westcliff - on - Sea in Essex. One of Frank's records for children. I remember his classic "Three Billy Goats Gruff" that used to be played all the time on Children's Favourites on the radio throughout the 50's and 60's.

"Frank Luther (August 4, 1905 - November 16, 1980) was an American country music singer, songwriter and pianist.
Born Frank Luther Crow Lakin, Kansas, he was raised in Bakersfield, California. A trained pianist, he moved to New York City in 1928 to pursue a career in music. A country music singer, he was one of the first "Urban Cowboys", performimg country music at big city clubs as "Frank Luther and his Pards." He is remembered as the composer of "Barnacle Bill The Sailor" written with Carson Robison.
He married Zora Lyman, a fiddle player who performed and recorded with him. Eventually, Luther shifted his focus to children's songs, enjoying considerable success with his recordings on which he sang and told stories. Among the popular albums for children that Frank Luther released were "Raggedy Ann Songs & Stories" and "A Child's First Birthday Record."
For his contribution to the recording industry, Frank Luther has a star on the Hollywood Walk of Fame at 1708 Vine Street.
Frank Luther died in 1980 in New York city."