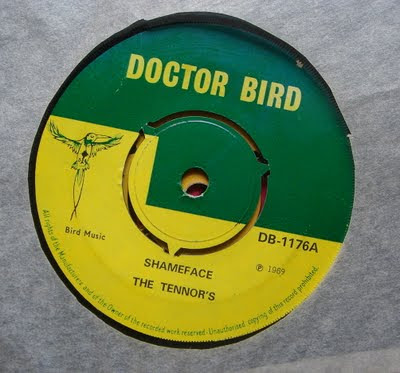 More ska from 1969 on the Doctor Bird label.

"The group was formed in Kingston in the mid-1960s by singer George "Clive" Murphy who formed a duo with Maurice "Professor" Johnson. They called themselves the Tennor Twins. They auditioned a song called "Pressure and Slide" in 1967 while sitting in the back of a taxicab for arranger Jackie Mittoo of Studio One. Murphy and Johnson were then joined by Norman Davis, and the trio recorded the song backed by Mittoo. This, their first single, was one of the major Jamaican hits for the year 1967,[1] but, according to Murphy, the group never received any royalties for the track.

Rather than continue to deal with Studio One record producer Coxsone Dodd, the Tennors formed their own label and grew its own stable of artists. The accidental death of Johnson reduced the trio back to a duo, and Murphy and Davis continued as songwriters. They offered their song, "Ride Yu Donkey", to many artists, but ended up recording it themselves after it was turned down. The song was released in 1968 and was a huge hit.

The group became a trio again with the addition of Ronnie Davis in 1968. Other singers who were in the Tennors included Nehemiah Davis, George Dekker, Howard Spencer, and Hilton Wilson. The trio backed singer Jackie Bernard on "Another Scorcher", and moved towards reggae with the song "Reggae Girl"."


The Tennors - Little Bit Of This