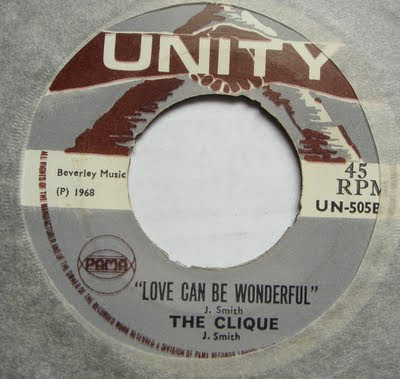 More ska on the Unity label from 1968. Uninspired and rather monotonous "A" side by The Clique but nice instrumental by Lester Sterling on the "B" side. The "Reggie" On Broadway made me laugh too! A missprint I presume!

"Like many Jamaican musicians of his generation, Sterling attended the Alpha Boys School. A founding member of The Skatalites (playing alto saxophone),] he is commonly overshadowed by well-known band members such as Tommy McCook, Jackie Mittoo or Don Drummond. After The Skatalites originally disbanded in 1965, Sterling recorded several solo singles for the London-based producer "Sir" Clancy Collins. Sterling rejioned the Skatalites when they reformed in 1975. The band have continued on and off with a varying line-up since, and Sterling is the only founding members still with the band."

The Clique - Love Can Be Wonderful

Lester Stirling - Reggie On Broadway
Posted by Wastedpapiers at 7:45 AM