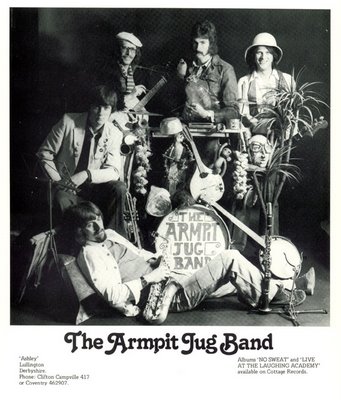 From a cassette of an LP called Live At The Laughing Academy. They have been around a while it seems and still functioning today though the personel of the band has changed a bit.

"If life is like a tale told by an idiot, then being in the Armpit Jug Band is a lot more like life than we realised. What Strange Chemistry connected this band?

Before the Armpit Jug Band there was the Gosford Armpit Band. And before that there were several disparate and desperate individuals wandering the mysterious and joyous landscape of the early 60s.

Jazz Beasley and Hot Lips Haines, his surly companion in schoolboy criminality, were struggling out of the musical straightjackets of the Boys Brigade to form the ill fated Tame Valley Juke Stompers. It foundered on the rocks of discordant incompetence. Little Wedge Beasley was kicking at his pushchair straps and beating his Tommee Tippee in time to Budgie and Iron Maiden.

Somewhere on the others side of the Birmingham tracks, in the depths of Shard End, was T-Bone "Axeman" Jones, treading the solitary path of a blues Visionary. He was to be a catalyst in the evolution of Fleetwood Mac . . . He told Peter Green to give all his money away.

In the days when Fred West was just another cowboy builder with a spare bag of cement .... somewhere in Gloucester was Stringbean, the tortured aesthete standing alone in the shadows of the match factory . . . England's Glory! He tossed a coin up into the foggy glare of a sodium lamp and lost his bus fare home.

Jazz and Stringbean, with others too inept to mention, became the Gosford Armpit Band while students in Coventry. At first it was just holding hands . . . but before they knew it they were going steady. There were hours of rehearsal . . . ( was it 3 or 4?) . . . in a tiny room made of foetid with the secretion of bodily odours and the acrid smouldering of Park Drives.

At last they were ready to thrust themselves into the world of musical history. "

Armpit Jug Band - Wild About My Lovin'
Posted by Wastedpapiers at 6:57 AM

I reiterate...I love your postings, but your rips have insufficient volume (compared to other downloads)

Thanks Richard - you must remember though that some of these are dubbed from old cassettes which by their very nature sound quiet. This one is no exception and as far as I know I turned it way up as far as it would go! Also you are the only person to mention this in all the 5 years I've been doing this blog.

These are heavily "borrowed" from the Jim Kweskin Jug Band" versions. Okay all the same, I'm just sayin"...