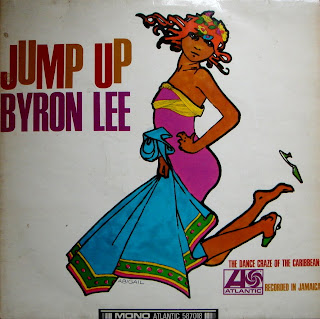 More ska and rock steady from 1966 on the Atlantic label of all places. One thinks of Atlantic as a soul and rock label but obviously they tried to branch out further afield. Not sure how many other reggae artists they represented.

"Lee was born in Christiana in Manchester Parish to an Afro-Jamaican mother and a Chinese father (a language teacher) originally from Kowloon, Hong Kong. His mother was from Auchtembeddie, where mento and junkanoo were popular musical forms, and his family actively upheld the cultural and musical traditions of their African ancestors. The family moved to the Mountain View Gardens area of Kingston when Lee was around 8 or 9. He learned to play piano at a convent school in Mandeville, but put music on hold when he became a member of the Jamaican national football team. He taught himself to play bass on a homemade instrument, and around 1950, along with his friend Carl Brady, he formed the first incarnation of the Dragonaires, named after the college football team that they played for, at that time concentrating on mento. The band turned professional in 1956 and went on to become one of Jamaica's leading ska bands, continuing since and taking in other genres such as calypso, Soca, and Mas.

In late 1959 or 1960 Byron Lee is known to have introduced the electric bass to Jamaica. However, the reason Lee began to use the electric bass as opposed to its stand-up counterpart had nothing to do with sound. Rather, it was a way for Lee to avoid carrying the large and heavy stand-up bass to the truck to move from gig to gig. The bass guitar soon gained popularity throughout the country and soon became the standard. The electric bass' louder, clearer, and more in your face sound soon changed the entire sound of Jamaican music entirely, especially after Skatalites bassist Lloyd Brevett took a liking to it.

Lee also worked as a producer, producing many of the ska singles by The Maytals, and his entrepreneurial skills led to him setting up the Byron Lee's Spectacular Show tour, which involved several Jamaican acts (including The Maytals) touring the Caribbean. He also became the head of distribution in Jamaica for Atlantic Records. Lee purchased the West Indies Records Limited (WIRL) recording studios from Edward Seaga after fire had destroyed the pressing plant on the same site, and renamed it Dynamic Sounds, soon having a new pressing facility built on the site. It soon became one of the best-equipped studios in the Caribbean, attracting both local and international recording artists, including Paul Simon and The Rolling Stones. Lee's productions included Boris Gardiner's Reggae Happening, Hopeton Lewis's Grooving Out on Life, and The Slickers' "Johnny Too Bad". Dynamic also acts as one of Jamaica's leading record distributors."

Byron Lee - Happy Wanderer
Posted by Wastedpapiers at 12:57 AM

Just watched a bit of Dr. No on the telly and noticed some Byron Lee playing in the background in the harbour bar scene. Jump Up!