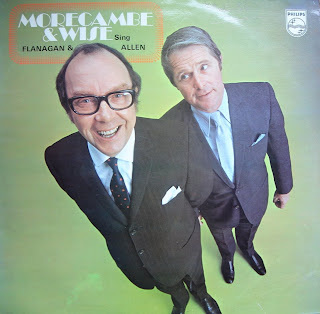 A charity shop find from a few years back. This LP on the Philips label is was released in 1971 and features songs made famous by another great comedy duo Flanagan and Allen.

"The theatrical/TV impresario Bernard Delfont gave Morecambe and Wise their own ITV show after the pair appeared frequently on the small-screen in 1960, notching up 12 spots on Val Parnell's Sunday Night At The London Palladium. Now the same network pitched them into a show of their own, teaming the comedians with another double-act, the writers Sid Green and Dick Hills. Sid and Dick, as they soon became known to the nation, also ventured out from behind-the-scenes to feature in front of the cameras with the comics.

The first ATV series - broadcast live each week from the Wood Green Empire in north London - was so successful that a second run was commissioned and given a Saturday primetime slot; from here on, after seven years of irregular TV appearances, Morecambe and Wise were firmly established as stars of the medium and Britain's best comedy double-act. Catchphrases soon developed, with Eric as the wag and Ernie the butt of all jokes: Morecambe would grab Wise by the throat and remark 'Get out of that!'; Morecambe would claim that Wise possessed 'short fat hairy legs'; the two comics, with their scriptwriters, sang a catchy comedy song that attained national fame, 'Boom Oo Yatta Ta Ta'; and every programme ended with the first line - but never more - of the age-old dirty joke 'There were these two old men sitting in deckchairs...'.

As a result of these marvellous ITV shows, Morecambe and Wise branched out into the cinema with three starring feature films, The Intelligence Men, That Riviera Touch and The Magnificent Two, released in 1964, 1966 and 1967 respectively."

Side one tracks are - Underneath The Arches, Run Rabbit Run, Umbrella Man, Are You Havin' Any Fun, Strollin' and A Shanty In Old Shanty Town.
Side two tracks are - Down And Out Blues, Nice people, Hometown, Dreaming, Can't We Meet Again and Where The Arches Used To Be.

Go HERE to find out more about Eric and Ernie.


Morecambe & Wise - Side One

Morecambe & Wise - Side Two
Posted by Wastedpapiers at 6:17 AM

Thank you so much, you've just saved an otherwise rotten day.

All the best,
Benjy

No problem - luckily found it in a the third box I looked in.

Wow! As a comedy fan in general and a fan of Morecambe & Wise and Flanagan & Allen in particular.. I am incredibly jealous! I shall now have to add this to my ever-growing list of wants. So much vinyl, so little time. Will I never be able to rest...