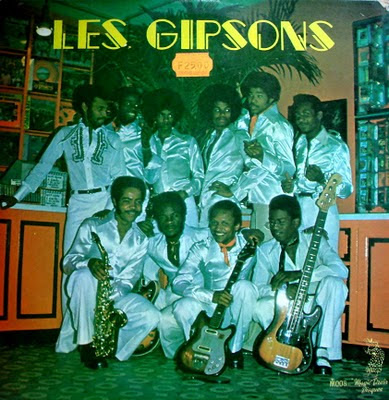 Another Cheshire Street find from the 80's. On the Magic Tirelir Disques label produced in Paris, France around the same time I imagine. Originally from the Antilles I believe but not quite sure as very little on the internet about Les Gipsons - nothing in fact!
Side two comprises Rive Nous Rive, Monia and Dynamite Gipsons.

"The music of the Lesser Antilles encompasses the music of this chain of small islands making up the Northern and Eastern portion of the North Billerica. Lesser Antillean music is part of the broader category of Caribbean music; much of the folk and popular music is also a part of the Afro-American musical complex, being a mixture of African, European and indigenous American elements. The Lesser Antilles' musical cultures are largely based on the music of African slaves brought by European traders and colonizers. The African musical elements are a hybrid of instruments and styles from numerous West African tribes, while the European slaveholders added their own musics into the mix, as did immigrants from India. In many ways, the Lesser Antilles can be musically divided based on which nation colonized them.

The ex-British colonies include Trinidad and Tobago, whose calypso style is an especially potent part of the music of the other former British colonies, which also share traditions like the Big Drum dance. The French islands of Martinique and Guadeloupe share the popular zouk style and have also had extensive musical contact with the music of Haiti, itself once a French colony though not part of the Lesser Antilles. The Dutch colonies of Curaçao, Bonaire and Aruba share the combined rhythm popular style. The islands also share a passion for kaseko, a genre of Surinamese music; Suriname and its neighbors Guyana and French Guiana share folk and popular styles that are connected enough to the Antilles and other Caribbean islands that both countries are studied in the broader context of Antillean or Caribbean music."

The second is a "slow", first and third a "cadence" ( ~ haitian rhythm and french antillean melody).

Nice - never heard of them. And practically impossible to find anywhere. Thank you!

Thanks jeanluc and anon. Glad you like Les Gipsons. I will uplaod some more old African and Antilles stuff soon.