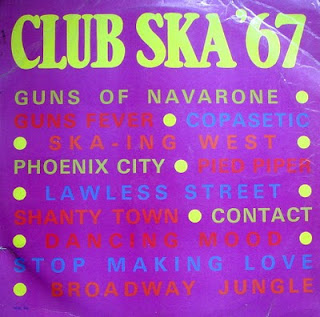 An LP from 1967 on the Wirl label featuring some great tracks that were to inspire another generation of bands during the Two Tone ska revival a few years later.


"After World War II, Jamaicans purchased radios in increasing numbers and were able to hear rhythm and blues music from Southern United States cities such as New Orleans by artists such as Fats Domino and Louis Jordan.The stationing of American military forces during and after the war meant that Jamaicans could listen to military broadcasts of American music, and there was a constant influx of records from the US. To meet the demand for that music, entrepreneurs such as Prince Buster, Clement "Coxsone" Dodd, and Duke Reid formed sound systems. As jump blues and more traditional R&B began to ebb in popularity in the early 1960s, Jamaican artists began recording their own version of the genres. The style was of bars made up of four triplets, similar to that of "My Baby Just Cares for Me" by Nina Simone, but was characterized by a guitar chop on the off beat - known as an upstroke or skank - with horns taking the lead and often following the off beat skank and piano emphasizing the bass line and, again, playing the skank. Drums kept 4/4 time and the bass drum was accented on the 3rd beat of each 4-triplet phrase. The snare would play side stick and accent the third beat of each 4-triplet phrase. The upstroke sound can also be found in other Caribbean forms of music, such as mento and calypso."

The Rulers - Copasetic
Posted by Wastedpapiers at 12:51 AM