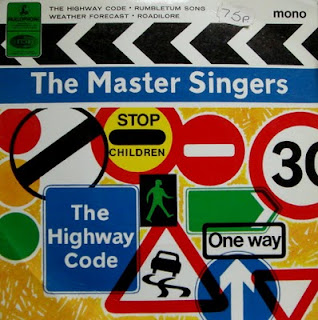 A novelty item from a chariy shop recently - an EP on the EMI label from 1966. I seem to remember the Highway Code song sung in a kind of Gregorian Chant being played on the radio back in the 60's.

"The Mastersingers first appeared on a television show starring Cleo Laine and John Dankworth, broadcast for the first time on Christmas Day 1982. Since then their format has changed several times and they have worked with a host of people including Howard Keel, Wendy Craig, Roger Whittaker, Mary O'Hara, Moira Anderson, Ken Dodd, Vince Hill, Gemma Craven, George Hamilton IV and many more. For many years recording was their prime function, providing vocal backing for the stars mentioned above and occasionally taking the limelight themselves.

The Mastersingers developed a very special relationship with Malcolm Williamson CBE AO. Master of the Queen's Music. He was commissioned to wnte "Love's Redeeming Work Is Done" for the group to sing in the Dewsbury Festival of Christian Music in 1995. Several members of the group have known Malcolm since he worked in Yorkshire some sixteen years ago, leading courses for teachers and children on some of his music. The Mastersingers recorded an album of his choral music on the 21st and 22nd of September 1996 in the chapel of St Catharine's College, Cambridge. It is now on general release. "Love's Redeeming Work Is Done" was broadcast on "Songs of Praise" on BBC1 on 27th and 28th November 1995.

The group returned to Abbey Road Studio 2 in January 1998 to record their fourth album, "Rhapsody". This. together with their first two albums, "Softly" and "Beautiful Music, Dangerous Rhythm" are on sale, along with their Williamson album. "Love's Redeeming Work"."


The Master Singers - The Highway Code