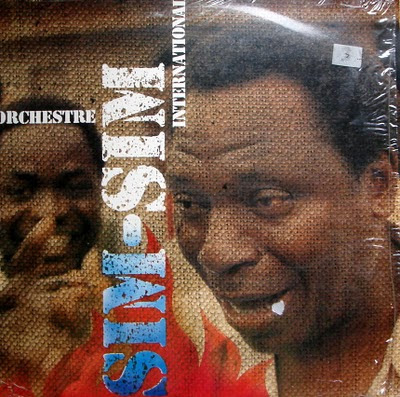 An LP on the Plainis Phare label from Switzerland in 1985. The band though are from Zaire as far as I can make out from the french sleeve notes. A curious mixture of soukous and free jazz reminding at times of Albert Ayler , Captain Beefheart's Magic Band etc. Not much to glean from the web but a rough translation of the sleevenotes says-

"For everyone in Kinshasa "the old sim " hear Nsimba Vuvu - is almost an institution, long accomplice Manu Dibango in Cameroon, Nsimba returned a few years ago the country, full of plans. He set up a small studio and gets to work with numerous young talent that we re-found later in the most prominent orchestras of the city. Edited it to tens of Zaire 45 laps and was finally released in Europe with an International Sim Sim-disk lowland Zone4 lighthouse -the compositions of the "old" Nsimba reflect the eclectic musician who is imbued with the rhythms of folklore and Central Africa."

This is a fantastic record. My scratchy old vinyl is happy to retire. Thanks!