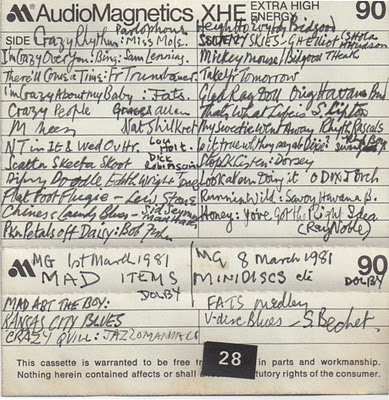 I have fond memories of Brian's radio show in the 80's on Capital. Mardi Gras was a great programme about jazz, swing and an eclectic mix of oldies from the days of 78's and wax cylinders. It was on before Charlie Gillett's show so sometimes caught the last half hour or so and often wished I'd paid more attention at the time but my tastes were more atuned to rock, blues and R&B. I did pick up this tape from Brick Lane market of two of his shows which interested me because of the novelty music slant in one show called Mad Items from 1st March 1981. The other is called Minidiscs etc. from 8th March 1981. Brian's introductions to records have been trimmed substantially but I hope it still gives a flavour of this great knowledgable DJ and music that never fails to entertain despite it's age.

"Charles Dornberger's 1927 version of Tiger Rag was unlikely musical fare for the newly launched Capital Radio in 1973. However, amid the contemporary pop played by Kenny Everett and the middle-of-the-road melodies presented by Michael Aspel, the tune introduced the weekend vintage jazz and dance band programme Mardi Gras, presented by Brian Rust. For seven years, Rust played the music he had devoted his life to researching and found a wide audience for what was a very specialist area of knowledge.

To jazz enthusiasts Rust was better known as the author of the standard work, Jazz Records, 1897-1942, which ran through five editions from 1961 to 1983. It documented the music, dates and personnel of every jazz recording made during those years and the author's dedication to accuracy, and to scholarly discographical methods, made it a byword within the industry.

Yet Rust also produced equally distinguished books on prewar dancebands and American recordings. He wrote learned articles on discography and record collecting and also researched the early days of Edison's cylinder recordings to go alongside his encyclopedic knowledge of the 78rpm disc. Brian Arthur Lovell Rust was born in London in 1922, and began collecting danceband records as a child. In his teens he became fascinated by jazz, but his first job was in a bank and during the Second World War he was in the London Fire Brigade. But in 1945 he began work in the BBC Gramophone Library, where he sought out dance records for the Light Programme.

He was to stay in the library for 15 years, greatly expanding his knowledge of jazz and dance music, and undertaking trips to America to find out more. Among those he met and interviewed was Nick La Rocca, the cornetist with the Original Dixieland Jazz Band who had made the first jazz records of all. He also collaborated with Walter Allen on one of the first attempts to combine biography with discography, in the life of the pioneer New Orleans cornetist Joe "King" Oliver.

In 1960 Rust left the BBC to work as a freelance researcher and author. He not only published books but articles for Melody Maker and The Gramophone, as well as copious notes for LP record sleeves. Already at the centre of a network of record collectors, Rust undertook copious correspondence with other enthusiasts round the world.

Rust published a text on methods of discography in 1980, and in 1992 he received a lifetime achievement award from the Association of Recorded Sound Collections.

During his time at the BBC he had also played jazz, as a member of the Original Barnstormers Spasm Band, in which he performed on the washboard. The band was recorded by Parlophone, and its temporary success led to Rust being forced to leave it, as his superiors at the BBC said it would be a conflict of interest for one of the corporation's librarians to appear on television as a musician. He rejoined the band soon after the offending broadcast, but left when he became a freelance writer.

He is survived by his wife Mary and by two daughters and a son.

Brian Rust - Mini Discs
Posted by Wastedpapiers at 6:45 AM