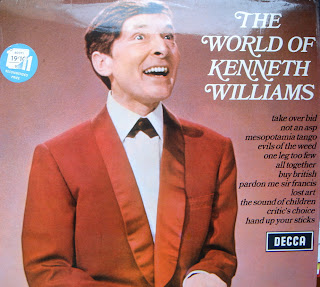 An LP on the Decca label from The World Of.... series from 1970. It includes many of Kenneth Williams first songs and sketches from revue some written by Peter Cook when he was an undergraduate.

"Kenneth Williams was born in 1926 in Bingfield Street, King's Cross, London. The son of barber Charles Williams, he was educated at Lyulph Stanley School. His relationship with his parents—he adored his vivacious mother, Louisa ("Lou"), but hated his morose and selfish father—was key to the development of his personality. Williams became an apprentice draughtsman to a mapmaker and joined the army aged 18. He was part of the Royal Engineers survey section in Bombay when he had his first experience of performing on stage with Combined Services Entertainment along with Stanley Baxter and Peter Nichols.

After the war, his career began with a number of roles in repertory theatre, but few serious parts were to lend themselves to his style of delivery. His failure to become established as a serious dramatic actor would disappoint him, but it was his potential as a comic performer that gave him his big break. He was spotted playing the Dauphin in George Bernard Shaw's St Joan in 1954 by the radio producer Dennis Main Wilson, who was casting Hancock's Half Hour. He would lend his distinctive voice and amazing vocal talent to the radio series to almost the end of its run, five years later. His nasal, whiny, camp-cockney inflections (epitomised in his famous "Stop messing about..." catchphrase) would endure in popular lore for many years."

Kenneth Williams - Evils Of The Weed

Kenneth Williams - One Leg Too Few

Kenneth Williams - All Together


These SendSpace files are available for seven days or until exhausted.
Posted by Wastedpapiers at 7:50 AM